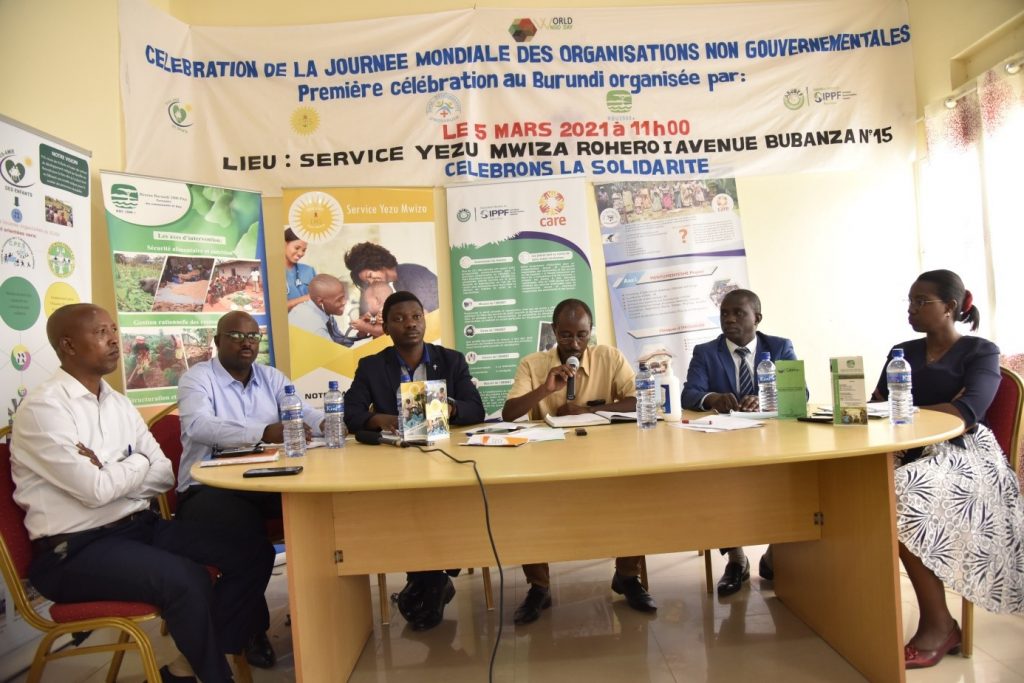 For the first time in Burundi, a consortium of 5 local NGOs, Association Burundaise pour le Bien-Etre Familial, (ABUBEF), IPROSARUDE (Initiative for the Promotion of Rural Health and Development), FVS Amis des Enfants, RBU2000+ (Burundi 2000 Plus Network) and Service Yezu Mwiza, celebrated the World NGO Day on March 5th under the theme : “The role of local Non-Governmental Organizations in the prevention of diseases and the fight against pandemics, cases of COVID-19, and  their contribution in the development of the country.

In fact, on February 27th of each year, the world celebrates the day of the NGOs (Non-Governmental Organizations).

Thanks to their actions throughout the world whose goal is to provide solutions in the fight against poverty, development, humanitarian action, research, education, health, global warming … millions of lives are transformed.

In front of the cameras of more than 20 media outlets in Burundi, the representatives of these 5 organizations presented each in its field of intervention, its real contribution in accompanying the government in its battle against poverty, access to quality health care, education, reduction of the high rate of unemployment among youth and women, reduction of malnutrition, rights and protection of children, environmental protection and the promotion of good governance.

Indeed, according to the envoy of the Ministry of Interior in Burundi, Mr. Déogratias Batiri, in charge of Civil Society Organizations within the Ministry, who opened the press conference, CSOs have today undeniably become key actors in the resolution of conflicts and crisis situations and in development. He then praised the efforts of these organizations that have spared no effort to support the government in the fight against COVID-19. “These five organizations have distributed hand washing devices, masks, organized training and sensitization in the fight against the pandemic throughout the country.  Mr. Batiri added.

It was a first celebration of the World NGO Day in Burundi, an initiative of Iprosarude which thought to work in consortium to highlight the efforts and achievements of local NGOs in Burundi.

It should be recalled that the World NGO Day is organized every February 27th and was officialized on April 17th 2010 by 12 countries of the Baltic Sea NGO Forum in Vilnius, Lithuania, on the initiative of Marcis Liors Skadmanis, a young student of international law who wanted to make the world a better place.   And it was on February 27, 2014, in Helsinki, Finland, that Helen Clark, Administrator of the United Nations Development Programme (UNDP), officially launched the international dimension of the celebration of this day.  Since then, it has been recognized by the UN.

Fundro is a non profit ngo helping charity organization. Our motive is to help the poor, helpless and orphan children all over the world.

World Sight Day: More than 23,000 people regained their sight at the polyclinics of Iprosarude until October 2020.