Tubakarorero Project: Hackthon prizes that push the winners towards the culture of entrepreneurial spirit 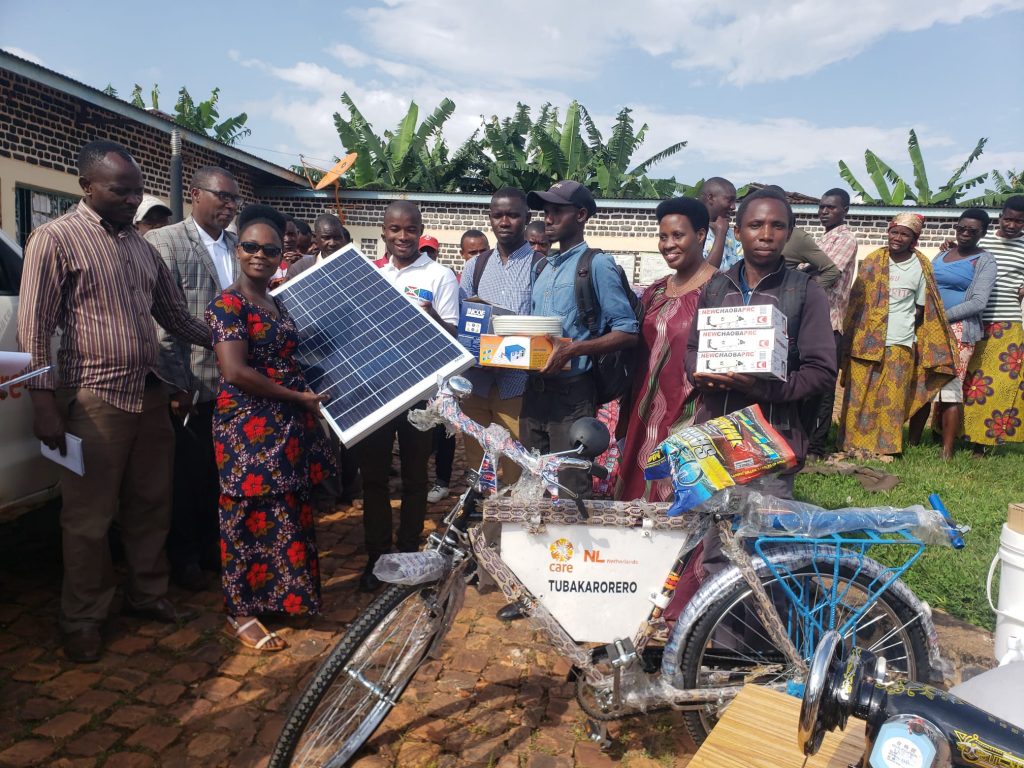 After the Hackthon organized by CARE Burundi within the framework of the Tubakarorero project, to have innovative ideas on the methodology and the necessary tools adapted to the needs of the youth that can perpetuate the management and the services of the Youth Centers and CLAC, 3 kinds of prizes were given in the week of March 7 to 11, 2022, to the first 3 who presented the best ideas. They are from the Youth Centers Giheta and Itaba, Gitega province Gihanga in Bubanza province and Kabezi in Bujumbura province.

Two months ago, CARE Burundi, within the framework of the Tubakarorero project, organized a Hackthon, aiming to bring out ideas from the young people themselves, to have a methodology and the necessary tools adapted to the needs of the young people who can perpetuate the management and the services of the Youth Centers and CLAC. For days, days, the young people from the 4 pilot youth centers of Itaba, Giheta province of Gitega, the youth centers Kabezi in Bujumbura province and the youth center Gihanga in Bubanza province, have tried to answer these questions: How to make the youth centers viable in their management and services by/for the youth and how to integrate social impact programs such as: Sexual and Gender Based Violence (SGBV), Sexual and Reproductive Health (SRH) and Youth Entrepreneurship in the youth centers. It was an opportunity to share their experiences on the problems that the youth centers have encountered. They should propose solutions for the revitalization of these centers. The best ideas collected should serve as prototypes that will be tested in four pilot Youth Centers first, to be implemented later to all youth centers in the country under the Tubakarorero project.  Among the solutions proposed by the young winners of this idea competition, there are among others: the introduction in the youth centers of training sessions in entrepreneurship, the integration in these youth centers of programs to fight against sexual and gender-based violence, sexual and reproductive health of young people and adolescents, training on the use of computer tools, management of the centers by the youth themselves, etc.

Thus, during the week of March 7 to 11, 2022, Care Burundi, in collaboration with Iprosarude, the organization implementing the Tubakarorero project, in the provinces of Gitega, Kayanza and Bubanza, proceeded to award prizes to the first 3 young people who proposed the best ideas.

The first benefited from a complete hairdressing kit, the second from a complete sewing machine and the third from a transport bike. Dr. Jacqueline Nintunze also challenged the winners not to sell the prizes received but to use them for their self-development and to train other young people in these trades in order to face the unemployment that haunts Burundian youth.

All the beneficiaries appreciated the quality of the prizes received and committed themselves to train others. Being in the month of women, March, the young girls who received these Hackthon prizes felt honored to be awarded on the eve of March 8. “My name is Claudine Ndayikengurukiye. During the competition, I represented our group called “Abahindukiza mipfunnda”, engaged in the fight against SGBV. There are several men in our group. I am happy that I was chosen to represent them as a woman. And here I won the first prize for the group, a complete hair salon. You have honored me, I will celebrate the International Women’s Day with pride. Thank you CARE Burundi for encouraging the girls to participate in the idea competition. Claudine Ndayikengurukiye, young Giheta center, was delighted.

Mr. Gérard Nibigira, chief of staff of the governor of the Gitega Province who followed the whole process of the competition at the Itaba youth center thanked Care Burundi for having thought of the prize in direct link with entrepreneurship. “I followed the whole process of the competition. I was a member of the jury from the beginning. I thank Care Burundi because this competition has awakened the youth, thanks to the ideas collected, the youth centers will be well revitalized. On the side of the administration, we promise to follow up on these young winners so that they start working and train other young people. Said Mr. Gérard Nibigira.